I’ve read from Twitter that writing in Comic Sans improves writing speed and creativity so here I am trying that theory out, ranting in MS Word, since it has been proven effective by others.

It’s just weird though because I don’t even know what to share with you guys. I don’t want it to seem like I’m forcing myself to write (kahit medyo ganun na nga) since I just bought my domain again and I don’t want to feel bad na binayaran ko for a year tapos ‘di ko lang gagamitin.

Speaking of domain, sad news: I lost loveamielle.com. I intentionally did not renew it when it expired almost two months ago because I wasn’t active in writing that time and I stupidly thought no one’s going to buy it.

To be honest, it was also a little too late when I realized that I can’t use the domain anymore. I have already renewed my plan with WordPress and loveamielle wasn’t working when I was mapping it. Some DNS errors were going on so I thought it might just take a little time. However after that “little time”, I’m still facing the same error, so I decided to finally ask help from the WordPress Team.

The support then told me that a Chinese domain company purchased the domain (only) 2 days ago and I should communicate with them if the domain is still available for me. Unfortunately, there’s nothing else they can do about this, and if I wanted to keep it with me, I obviously have to pay.

It was at that moment that I decided I have to let it go.

Anyhow, to end the topic above, it’s been a good blogging era with loveamielle. I’m now using amielledetorres.com as my blog URL and I hope you stick with me until my surname changes. Naks! Which means you have to stick with me for around 4 to 5 years pa. Hahaha. I hope I’m still writing by then. I pray that I’m happy.

Moving forward to another change in my life, I am now a short-haired girl, and this is the shortest it has been after almost 10 years. I was 14 the last time I cut my hair this short and of course, there’s a story behind all these.

First and foremost, it wasn’t supposed to be like this. It was supposed to be below shoulder level but the first hairstylist I went to ruined everything for me. (Happy Belle Ladies Salon, I’m talkin’ ‘bout you.)

Looks okay, right? But when you look closer, it’s like this. 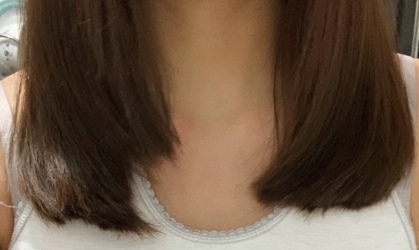 I was too pissed.

I came back the next day, asking her to fix it for me, showing the photo above. She told me she can’t that time and I should come back the next day. The following day after, she told me she still can’t and I should just come back after two hours. Parang for me.. Teka lang naman. Shouldn’t I be on priority since it was her fault naman? She wasn’t even apologetic tapos siya pa ‘yung nag-attitude sa’kin. (Bakit parang kasalanan ko?)

I never came back and I haven’t forgiven her since. lol

I went to another salon the next day after and yup, you guessed it right. The hairstylist made it worse. Turns out she did not understand what I wanted, cut my hair THIS short, and I looked like this meme.

GIRL. I am seriously on the edge of crying. No joke. My hair is too short and it looks so ugly. Good thing another hairstylist (who’s also from the Philippines) just wrapped up with another customer and saved me from all this mess. She’s like, “There’s nothing we can do because it’s already this short; let’s just make it look okay.”

And it’s fine. No big deal. I’ve got compliments that short hair suits me which kind of feeds my ego sometimes; especially when I look like a bird’s nest because I did not get up early to blow-dry and straighten my hair. Yes, it’s cute – can be sexy also – IF you have the time and strength to have that kind of maintenance. But if you’d rather sleep 30 minutes more than do that maintenance, high-five. Good to know I’m not the only one who looks like a freaking nest here.

The last change I wanted to talk about (for now, since this post is getting quite long and the theory I have mentioned above has already been proven), is my change of perception in life.

A big change of tone and emotion from the first two changes, yes, but I had to talk about this because it’s okay. Also because this is my blog, so you don’t have a choice. :p

Simple changes like this help you move forward positively in life. Another example is when you think you have so many things on your hand. What you need to do is list all those things out and count them. Say it’s five, then it’s only five things, right? Not so many! Do one, then great! Now, you only have four things left to do.

Perception. It’s all about perception. How you look at things, how you see what is really happening.

As Uncle Stephen Covey once said, what distinguishes us humans from all other animals is our ability to examine our own character, to decide how to view ourselves and our situations, and to control our own effectiveness. Meaning, we have the ability to choose how to respond to certain situations. We have the power to control our emotions; NOT letting our emotions control us. It’s a little hard at first, but then again, slow progress is still progress. :)

Change is inevitable. Accept it. Make peace with it. Don’t be afraid of it. We are slowly changing, healing, evolving, and growing. And if one day things may not seem right, maybe it’s time to change and look at it on a different perspective.

PS: Do you wanna know what the name of my hair savior is? Lily. :) Happy 1st of November and have a great month ahead, everyone! Talk soon.

¹ – The “only” & “always” thinking varies from one topic to another.

25 thoughts on “Dealing with the recent changes in my life”